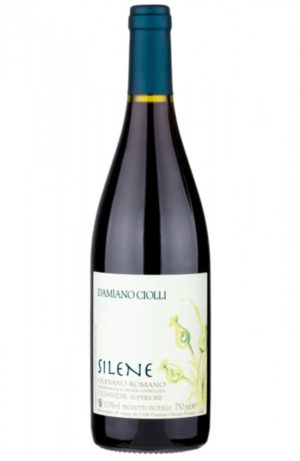 The winery is based in Olevano Romano in the south-eastern sector of Rome province. e hilly and montainous country – mostly volcanic – is characterized by micro climatic conditions that have allowed – during the course of the centuries – the developing of remarkable viticultural wisdom and skills. Ciolli began to bottle his wines in 2001, though the family has been working his vineyards for at least 4 generations. e limited surface (about 6 hectares) allow a very careful management of each single detail from the winter pruning to the bottling. All the work is done manually. All the vineyards are owned by Ciolli family and lie on the gentle slopes of a hill few kilometers south of Olevano, at about 450 meters above sea level. e southern aspect, the deep red coloured volcanic soils, the hot but dry summer days and the fresh August nights give Cesanese, the perfect ripening conditions. the basic principle is to craft wines able to express the aromatic character that arise from the interaction between grape and terroir, without losing the “memory” of tradition and respecting the natural environment.