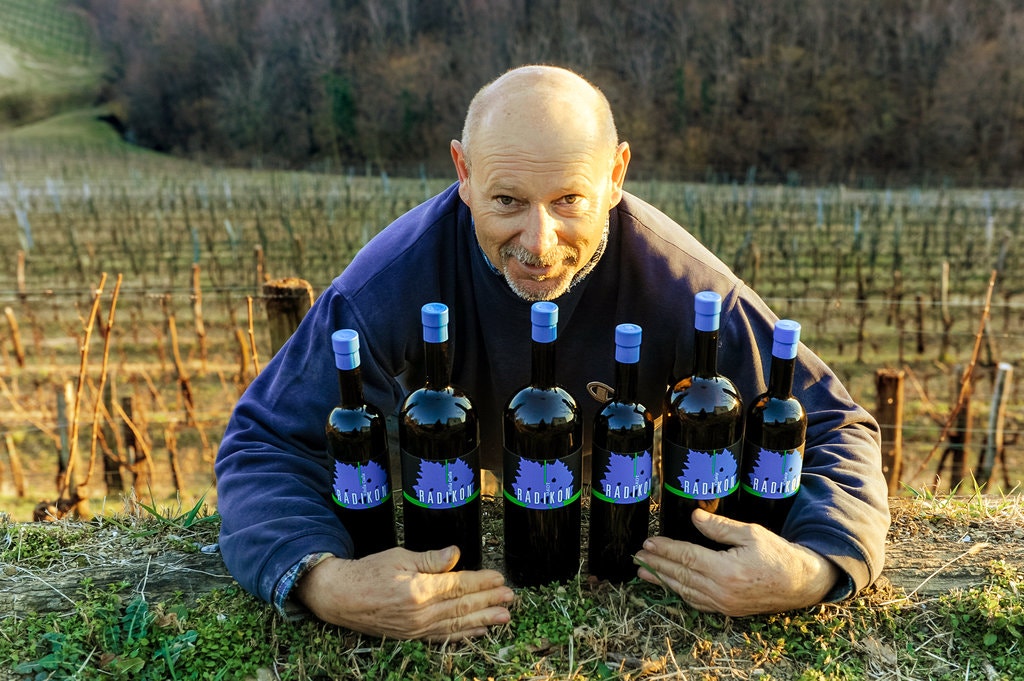 2016 Stanislao Radikon died of cancer a few weeks ago, on Sept. 11. He was just 62, and though most casual wine consumers may never have heard of him, his wines epitomized a level of beauty and truth sought by wine lovers every time they open a bottle.

Mr. Radikon, known as Stanko, worked primarily with his son, Sasa, growing grapes and making wine around the town of Oslavia, almost as far north and east as you can go in Italy, where the Friuli-Venezia Giulia region touches Slovenia. The political border is almost meaningless.

In the low rolling hills of the Collio, as the region just north of the city of Gorizia is known, stewardship of the land has changed dozens of times over the centuries as one conquerer or another took control. Whether the local people were ruled by the Hapsburgs or by Napoleon or whomever, they took their identity from the soil.

The Radikons — along with a collection of strong-willed, relentlessly experimental neighbors like Josko Gravner, Movia and, a little to the south, Edi Kante — have operated on another borderline, making wines that wander into territory half-forgotten in an age of chemical farming and technological winemaking. Their wines astound for their purity, their distinctiveness and their almost radical evocation of a pre-modern age.

I love all these wines. But what always stunned me in particular about the Radikon wines were not only their beauty but also their rock-solid stability, even though Mr. Radikon for years has been working without sulfur dioxide, the stabilizing additive used as a safety net in almost all fine wines around the world.

Many producers working in the realm of natural wines have forsaken sulfur dioxide in pursuit of a purer expression of the grape or the land. Such work requires scrupulous hygiene and meticulous care in the cellar, and careful shipping and storage.

If it’s not all handled correctly, you risk a bottle marred by bad aromas or flavors. I’ve had bottles of unsulfured wine that seemed like microbial soups. But I’ve never had a flawed bottle of Radikon.

Mr. Radikon’s refusal, since 2002, to add sulfur dioxide was not the only noteworthy characteristic of the wines. The whites were closer to amber or orange, and they sometimes seemed cloudy, as they were not filtered. On the palate they could seem austere, yet they were intense, energetic and full of life, with light, raspy tannins; pure, complex aromas, and flavors of pressed flowers and dried fruits.

Mr. Radikon began bottling wines from his family vineyard in 1979. Like his neighbor Gravner, Mr. Radikon early on made more-conventional wines, using modern tools like stainless steel tanks for fermentation and small barrels of French oak for aging. But he found he didn’t particularly like them, so he began a journey that ultimately took him backward, to a reimagining of the way his ancestors made wines.

“Why shouldn’t we discover these things?” he asked me when I visited him and his family back in 2005.

Gradually, Mr. Radikon began to pare away the trappings of modernity. He farmed organically, as people had for millenniums. In the cellar he traded in the steel and French oak for wooden vats and large barrels of Slavonian oak. Almost all modern wineries use temperature-controlled tanks, but for the Radikons, controlling the temperature meant opening the doors and windows to allow warm air into their very cold cantina.

The grapes would ferment with their natural yeast, and nothing would be added. Unlike Mr. Gravner, Mr. Radikon never gravitated toward amphorae, the ancient terra-cotta vessels that have undergone a revival stretching from the country of Georgia, where they are known as qvevri and have never stopped being used, to California and the rest of the winemaking world.

But, like Mr. Gravner and others around Oslavia, Mr. Radikon began to experiment with long macerations of his white wine grapes with their skins.

In conventional modern white-wine production, the grapes are crushed and the skins, which contain pigments and tannins, are removed quickly. Leaving the skins, seeds and stems to macerate with the juice, the way red wine is made, produces white wines that are no longer white and that are tannic.

The long maceration is crucial, the Radikons believe. Along with tannins and pigments, it extracts antioxidants and other substances that protect the wines for the long haul. After the maceration, the wines are aged in the big barrels for a prolonged period before they are released.

“We keep them in the cellar for six years,” Sasa Radikon told me by email, “so we are quite sure they are stable for the future.”

Many in the conventional wine world reassure themselves that their modern methods are correct by imagining all natural winemakers as hippies who are winging it. But the Radikons and others were able to achieve success only through endless experimentation and introspection, which involves admitting mistakes and learning from them. They had to rid themselves of many assumptions and preconceptions.

Stanko Radikon told me of a great lesson he had learned: “I know not to know anything.” His goal, he told me, was not solely commercial success. That, he said, he had achieved with the sort of wines he no longer made. Instead, he sought “a maximum expression of nature.”

To me, his wines were more than that. They were maximum expressions of culture, too. They were not made to be admired, or to be dissected intellectually. They were emotional wines, made to delight and to be shared among family and friends.

And they expressed the independence and joy of the people of this region, the profoundly human element that is sometimes forgotten in discussions of terroir.

“It’s not enough to be biodynamic or organic,” Mr. Radikon said back in 2005. “Wine has to be a pleasure to drink.”

Mr. Radikon’s imagination was not restricted to the wine production. He rethought the bottle, too, deciding that the conventional 750 milliliters was not the right size for his unsulfured wines. For two people who may like to share a white and a red with dinner, he reasoned, 500 milliliters was a much better size, so his unsulfured wines are available as half-liters or liters. Wait and wait again. To reach the balance and the stability, for a wine, it takes time, it takes years of aging in the barrels and fining in bottles.

He also decided that the neck of the conventional bottle was too wide. He narrowed it to 15 millimeters from 17.5, so the cork would be more compressed, and microscopically less air could pass through.

Does it make a difference? I don’t know, but as I’ve said, I’ve never had a bad bottle.

In the last decade, skin-macerated whites, often called orange wines, became somewhat fashionable. Very few eliminated sulfur dioxide, and not many were made with the care of a Radikon or a Gravner. Inevitably, their trendiness invited a backlash.

“It takes producers who are dedicated to getting it right,” said Bobby Stuckey, an owner of Frasca Food and Wine in Boulder, Colo., a restaurant that was inspired by the food and wine of Friuli-Venezia Giulia. “When you have producers who don’t really know what they are doing, that’s a problem.”

In recent years, Sasa Radikon, who will carry on his father’s work at the estate, wanted to have something more immediate to sell. He began the “S” line of Radikons, wines made just like the others, with the same amount of skin maceration, but aged only one year rather than the full six.

Because of the shorter aging, they receive a small dose of sulfur dioxide just before they’re put into the usual 750-milliliter bottles. They are delicious introductions to the Radikon style. Both the half-liter Radikons (2008 is the current vintage) and the “S” line bottles (2013 is current) sell for around $40 a bottle, not at all expensive for such labor-intensive wines.

If you are inclined, try a bottle and cross the border into a territory both new and old. And raise a glass to Stanko while you’re there.

FIND OUT OUR RADIKON SELECTION: